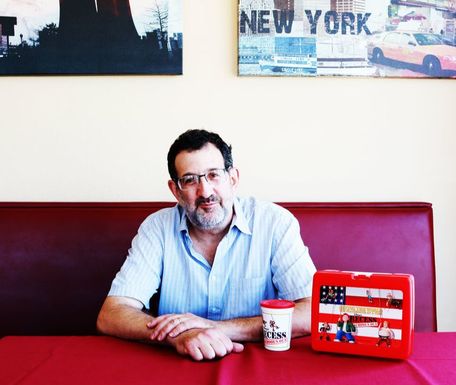 As the creator of Rugrats and Recess and the guy who pushed The Simpsons onto the Tracy Ullman Show, you might expect him to be an intimidating executive-type but in reality, Germain is an easy going and funny storyteller who makes you laugh and inspires you to push yourself more. I had originally planned to meet him at Coffee Source in Studio City, but the place was closed when I showed up and I had to redirect him to a lesser photogenic pizzeria across the street. His easy going response? "We can go wherever is easier for you!"   We ended up eating a pizza even though all we wanted was coffee, and even though Paul had already come from lunch, he was cool with having a slice with me. I wasn't hungry for the pizza either, but I was hungry to learn more about his Hollywood journey.
​
So, Paul, you really have had this amazing career both in live-action and animation, how did it all start?  How did you get your foot through the door?
I was at UCLA film school in the early 1980’s.  I needed a job for the summer in 1983. I didn’t know exactly what I was going to do, so I went to a friend I knew who was working on a show called Taxi.  He told me, ‘Well, the show I am working on is coming to an end and the three partners are going their separate ways.  One of them is making a movie and he needs an assistant.  Would you be interested in being a PA on that?’ And I said ‘Sure!  That’s exactly what I want to do!’ He set me up for an interview, I went and got the job and it turns out that job was Terms Of Endearment!

Matt Groening's Original Simpson Family on the Tracy Ullman Show
That was my first job in Hollywood in 1983.  Later, Jim Brooks, who I was working for, decided that he wanted to do a live-action TV series, which would turn out to be one of the first shows that was ever on the FOX network. Anyway, Brooks decided he wanted to have interstitial cartoons between the segments of the show, but what cartoons would they be? Someone, once gave him the artist's original drawing for a particular cartoon from the comic strip, Life In Hell, which Brooks had framed on his wall.  When someone asked Jim ‘Who do you want to get’ for the cartoon, Jim looked at the picture and he said, ‘Let’s get that guy!’ I was a huge fan of the Life In Hell comic strips, so, I jumped up and said, ‘That’s a great idea! I love that stuff!’  And he said ‘Great! You’re in charge!’ And I said, ‘But I don’t know anything about animation…’ and he said ‘You better learn!’ So suddenly, I was thrown into this! Not knowing what else to do, I grabbed a copy of "L.A. 411" - a film industry phone directory - and called every animation company that was in there, and said ‘I’m going to send you this cartoon strip for this show.  Give us an estimate of how much it will cost to do 30 seconds of animation, and send me your reel.’ Most of the reels were pretty bad, but there was this one reel that was kind of interesting… it was from this little company called Klasky Csupo. We met with them and decided to hire them.  So, that is how we did the original Simpsons cartoons that were on The Tracy Ullman Show.
​
Wow!  So, it seems like you are almost responsible for getting the most successful animation show of all time on the map!
Well, that would be silly to say, I am not responsible for it!  I was a part of setting up the original 30 second cartoons and what it was going to look like and what it was going to be.  I was part of it and I was very proud, but it was Matt’s show, his idea.  I did help him put it together, and I came up with a formula for how to do story-driven animation that gets really good results.  But it was his show, not mine. ​​​ 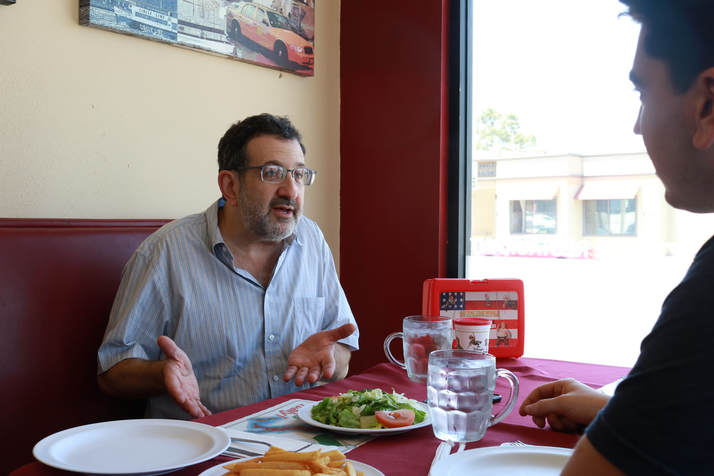 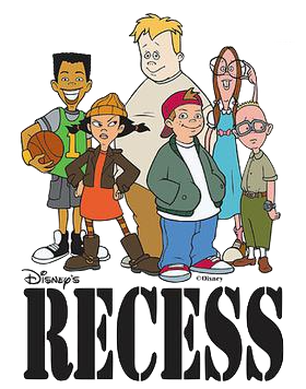 You have worked both with Nickelodeon and Disney.  Do they have different ways of approaching a project or are they similar in their creative process?
The thing is, what was a Disney cartoon and a Nickelodeon cartoon in the 90’s or 95 or 2000, is different from what they are today. I actually think it’s kind of a problem because they don’t have a particular style. They change their styles all of the time.  And the biggest problem is that the two companies imitate each other, which I think is always a mistake. What was great about Nickelodeon through the 90’s was that they had this unique style that no one else was doing.  And then, at some point, Disney Channel started to do their thing and Nickelodeon started to copy the Disney Channel and I think at that moment they started to lose their audience.  They weren’t doing anything original anymore. ​
​​
Disney has been having their trend of re-making their animated films into live-action films.  A lot is still in the works now and even a TV show like Kim Possible is getting one.  Recess could get one in the works before you know it.  Would you be interested in working on that? Who would you cast?
Well, I can’t say who I would cast but I would LOVE to do that!  Maybe that will happen, we don’t know. 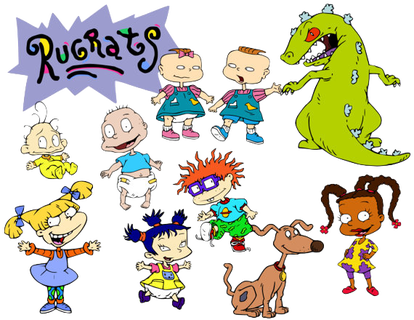 I have been told and taught that a lot of the best characters are based on real life.  I had read somewhere that the character, Angelica from Rugrats was based on a bully in your life.  Does she know?
No, she doesn’t (laughs).

Can you give some other examples of characters that are based on people from your life?
Sure! To some extent, the character of Gretchen in Recess was kind of based on my wife, who I knew when we were kids.  Spinelli was based on a tough, punk chick who my partner, Joe Ansolabehere, and I knew in film school!  TJ was based on a guy who Joe knew in elementary school.  He was this kind of chubby kid, yet very charming and sort of a leader, and Joe thought “Let’s make our hero kind of a funny looking kid!”  Vince was based on a really good friend of mine who I knew in college, a really cool, handsome, athletic guy who nevertheless hung out with all of us nerds, and I liked that!   A lot of our characters are based on real people, and in Rugrats, I named Tommy after my first child who was just a newborn at the time.  Boris and Mika, the grandparents in Rugrats, are based on my grandparents.  However, my grandparents were named Simon  - but pronounced "Semen"  and Mika, and I decided I didn’t want to use Semen… (laughing) True Story! 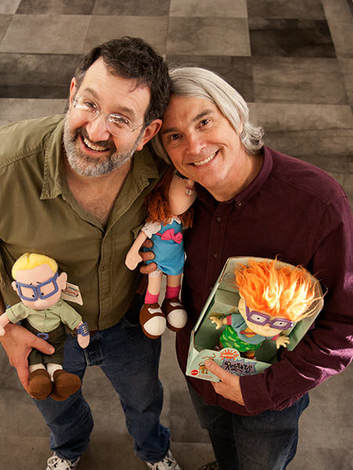 Paul & Joe hanging with Gus, Gretchen and Chuckie
You and your working partner, Joe Ansolabehere, have this amazing friendship; you created Recess, Lloyd In Space and Pound Puppies all together. What’s the best part about working together and would you recommend people who want to make in the industry to find a collaborator to work with, like a Joe or a Cohen Brother?
Well, for me, I am really somebody who likes to work with a partner, that is my personal preference.  I like having an interlocutor, somebody who I can bounce ideas off of.  It doubles the brain-power and sensibility, and that works for me.  Some people are lone wolves and they work better alone.  I think it just depends.  To me it’s what I always wanted and what I always craved and that’s why I like working with a partner, but I don’t think that is true for everyone.
​
What would you say was probably the hardest moment in your career and how did you get through it?
There are various times in a career that are tough.  The hardest part is between jobs when you want to be working but you have to wait until you can set something up.  Sometimes it means you have to persevere until you can get over the hump. Another hard thing is when you have been working on a show for a while and you kind of get fatigued and tired and thinking ‘Man! I’ve been doing this a long time!’  So, you have to adjust to that and work that out

"There are a particular number of things that I have a lot of pride in.  One being when your show goes on the air and it’s successful and people like it!  That feels really good!"

What was probably the proudest moment in your career and how did you take that pride and use it to move forward?
There are a particular number of things that I have a lot of pride in.  One being when your show goes on the air and it’s successful and people like it!  That feels really good!  Another thing is that years later when people come up to you and tell you how your show has really affected their lives and helped them get through something. I have heard African American kids tell us that Vince was the first animated role model they’ve ever had, that’s really exciting!
​
Is there an episode in particular that they usually bring up that had an affect on them?  Because the “Whomps” episode in Recess was one that inspired me a lot!
Well, that’s another great thing for me about Recess, it’s not one great episode, it’s a bunch of different episodes.  Different people tell me different episodes.  A lot of gay kids really responded to the episode where Vince dresses in high-heels to show Spinelli how to walk in them.  People think that’s so cool!  I just read a thing online about the "Economics of Recess" episode, and how people learned about economics through that episode. Another thing I get a kick out of – I don’t know that it’s my favorite thing – but when you read those crazy theories on the internet about what things mean.  It's often not what we intended, but it's exciting to me that people got so involved in the show that they start coming up with theories about what we were saying. ​

"Be bold, come up with something interesting that you want to try and go after it hard NOW! You are never too young, but you can be too old."   ​ 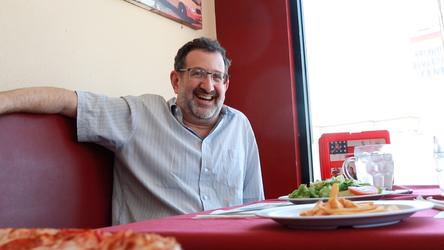 What’s the best advice someone has ever given you?
When I was working for Gracey Films, Jim Brooks’ company, an older writer on one of the shows who was a buddy of mine came to me and said ‘Paul, if you’re going to be a producer, if you’re going to create stuff and be involved in this business, the time to strike is now -- Not tomorrow, not a year or two from now --it is now.  It will be too late if you don’t act.’ I think that is really good advice for anyone in the film industry.  You get to a certain age, and they don’t want to talk to you because you’re too old… and let me tell you, that age is not very old!.  So be bold, come up with something interesting that you want to try and go after it hard, now! You are never too young, but you can be too old.
To check out more of Paul Germain's career, click here! www.imdb.com/name/nm0314480/