Written by Romeo Oscar Cascolan
​Photos by Romeo Oscar Cascolan and Marta Huo
The inclusive mindset of the American dream makes the United States a welcoming destination for the variety of cultures that the world has to offer. As a Filipino who immigrated to the United States in 2000 and earned my American citizenship in 2018, I can personally attest to the opportunity within this country; as a result, I am more aware of the struggles and hardships that people endure in the hopes of leading a better life in the United States. The field of ethnic studies focuses on understanding the undeniable impact that these immigrants make on this country. The people involved in these studies may come from vastly different backgrounds, but their goal is always the same: to build upon the principles of freedom and independence that unite all Americans.

​“Asian-American studies has historically always been built on community collaboration and being very hands-on, and that is the spirit that I have tried to keep alive to this day,” Allan says. “I don’t believe in the idea of the top-down form of education. That doesn’t work! For me, as a former college student, I learned most when I was able to interact and learn, not just with my professors, but with my classmates as well.”

Allan seeks to establish rapport between people, which manifests itself in his philosophy as a teacher. “Asian-American studies tries to bring people from different origins and different backgrounds together, as society is meant to be. It affects all of us because I believe we are all interconnected and as members of society, it’s our duty to empathize and respect one another.”

Professor Aquino holds this perspective because he also witnessed and empathized with his fellow Asian-Americans as a student. “I remember a generation ago, I was a senior when the Los Angeles riots went down in 1992. I look at that particular chapter, especially of how Korean-Americans were represented,” Allan recalls. “The dehumanization and the disregard for Korean-Americans in particular was a hard thing to swallow. It was stunningly a hard thing to bear, and I’m not even Korean American. I sorely empathized with the plight of my immigrant neighbors.” Although Allan was speaking as a Filipino-American, he was also speaking as an Asian-American, a Los Angeles resident, and most importantly, an American citizen. Ethnic boundaries do not and should not prevent Americans of any race or culture from supporting and understanding each other in times of need.

Allan’s poetry reflects another aspect of him that is not defined by his ethnicity, further establishing the idea that “Asian-American” is primarily based on the experiences of being an American. “In my heart, I consider myself a Los Angeleno first, before I consider myself Filipino-American or Asian-American,” he explains. “Because the way I dress, the way I talk, how I live my life, I share so much more in common with my neighbors and the people around me than even my relatives in the Philippines!” In one of his poems, “Area Codes 213, 310, 323, 626, and 818”, he tells the stories of various people around Los Angeles, all with different backgrounds, dreams, goals, and problems.
Published in the July 2019 edition of Cultural Weekly, the colorful language and candid presentation showcase Professor Aquino’s strong sense of the local community that lives and breathes around him.

​“One of my social media aliases is #poetproflife, and I picked that phrase as a kind of crystallization of what I do as a writer: I write poetry, but I also write academic stuff… as an academic, obviously, I’m addressing issues of race, ethnicity, sociological theory and history – I’m addressing it head-on, I’m being overtly political and direct. My poetry is different – I haven’t been published as much as other Asian-American poets because I don’t wear my Asian-American studies identity on my sleeve as a poet, per se.” Professor Aquino likens this distinction to taking on a dual identity, and this ambiguity allows him to find his own creative voice and truly express himself.

Allan Aquino was able to develop his own voice and find his own place in the world through years of writing and learning. As an Asian-American professor, he strives to help his students do the same. “My ardent hope for every student at the end of the semester is that they look at themselves and look at the world differently. When I say ‘differently’, I mean a more open-minded, loving, and respectful way. That’s the sum of it. The nuances of how that love and appreciation will manifest, I leave it in the hands of the students.” That is how Allan’s students will contribute to the legacy of the United States - this mindset of acceptance is what connects not only Asian-Americans together, but all Americans together. 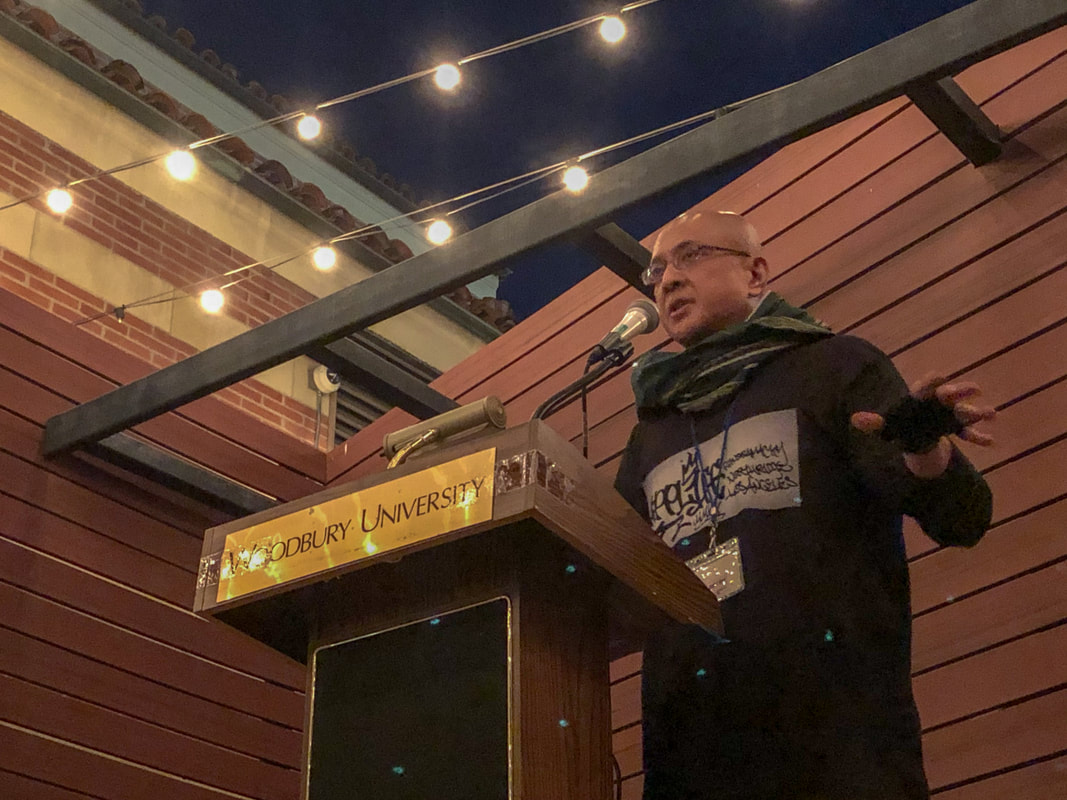 Find more of Allan Aquino's work with the #poetproflife tag, or catch him on the Cal State Northridge campus.