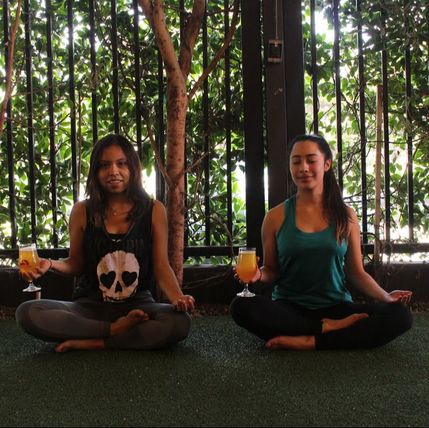 Near the train tracks in an industrial area of San Fernando Valley, I walked into a bright yellow building. Inside, there was a layout of fake green grass in a picnic area and thirty people about to run around it. I joined them. A few moments into it, I was doing the Half Moon yoga pose and then, ninety minutes later, I was drinking a Mango Cart beer. What happened? Beer Yoga. Yes, you did not misread, Beer Yoga is a thing!

In recent years, Yoga has gained much popularity, but has it become so monotonous and boring that people have begun to combine it with unusual practices?

This discipline that helps combat stress and problems related to depression is trendy and has caused a wave of multiple variations of the original practice. However, it is not the “classic” Yoga that has given rise to much debate. After the creation of weird and unusual adaptations, like Hot Yoga and even Aerial Yoga, another peculiar form has gained fans all around the world: Yoga with beer. “Brew Yoga is the union of two things that almost everybody loves: a good crafted beer with an excellent workout” says a lover of this new practice.  Combining the benefits of Yoga with the pleasure of tasting a craft beer is possible. Beer Yoga is a variant of classic yoga that is practiced normally with a bottle of beer as a sports accessory; a complement that, in addition, also serves to refresh at the end of a tough yoga section.

Los Angeles also adopted this unusual Yoga practice. Brew Yoga was created five years ago by Rob Rice and combines running, yoga and beer.
​
“I think it started because my fiancé and I like to work out so we would take a run and take a yoga class with some friends and it would always end afterwards, we would get a beer; afterwards he is a chef so he enjoys good flavors that is why craft beer specially. We started doing it with our friends and then it turned to a business,” says Abica Dubay, Yoga instructor and co-founder of Brew Yoga. It is a place where you can enjoy a good but challenging workout. The experience starts with a 30 minute run which can also be enjoyed around the streets with an instructor depending on preference. Then, you go to the back room of a Brewery restaurant where a yoga instructor is impatiently waiting to teach an intense 90 minute workout. After an hour and half of yoga poses, the founders of Brew Yoga think that the best way to finish a workout is by rewarding yourself with a delicious crafted beer in the company of friends and workout mates.
I entered the room and everybody was unfolding their mats, it looked as if everyone had an assigned place, therefore I decided to place my mat in the corner. The description of the class stated that it was open to every level but when everybody was doing the Bakasana pose (a pose where all the weight of your body is put in your arms), I looked around and I thought “OMG everybody is an expert!” I felt uncomfortable because all of them seemed too good at yoga while this was my very first exposure. Although the class was a challenge, I was able to reach a level of maximum relaxation and then indulge in a delicious mango flavored hand crafted beer.

You can find this practice all over Los Angeles in some of the local Breweries. Brew Yoga is offered every Saturday morning at The Golden Road Brewery where you can find a variety of innovative beers: such as Mango Cart which is popular among Brew Yoga lovers. Each session starts at 9 am and ends at 11 am for a mere $15 which includes the run, yoga and beer of your choice. 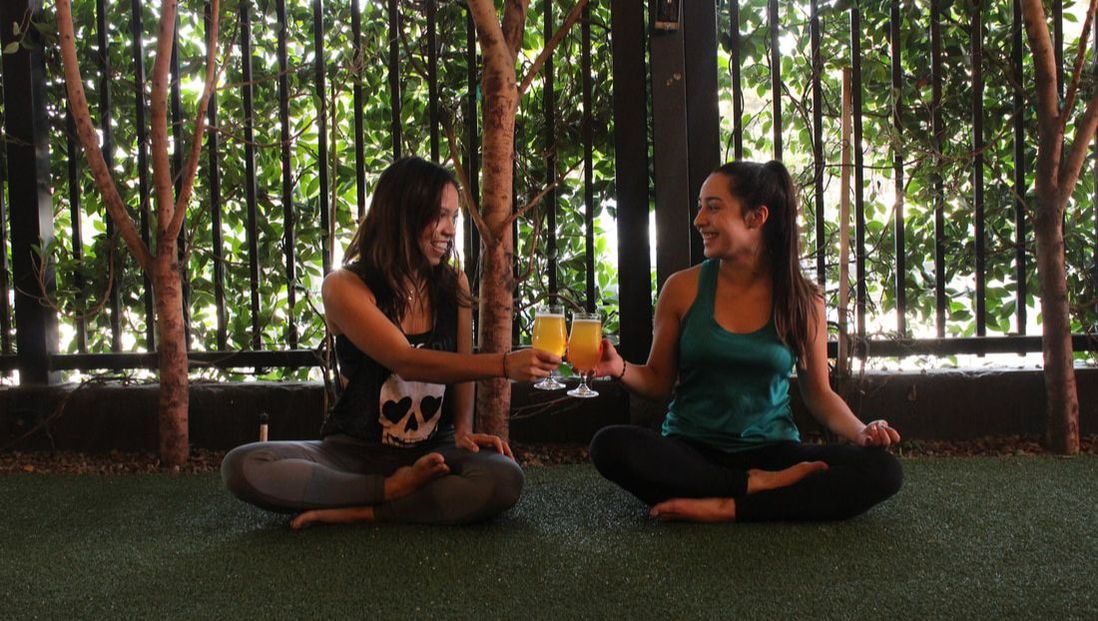