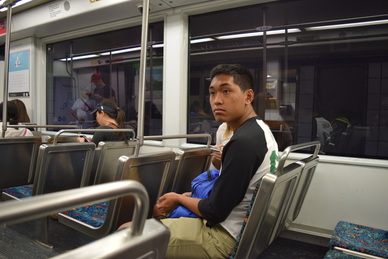 On an overcast morning, Mohammed Alhassan met me at the North Hollywood Metro station.  Because of the recent expansion of the Metro Expo Line that extends from Los Angeles all the way to Santa Monica, I proposed a challenge to my friend Mohammad: Car vs. Metro. Who would get from NoHo to Santa Monica first: Mohammed in his car or me on the train? After some friendly trash talk, Mohammad got in his car and I went down to the North Hollywood station.

​The idea of modern Metros first began in 1975 when new elected officials formed the Rapid Transit Advisory Committee to improve public transportation for the future. In 1980 a ½ cent sales tax passed by 54% to fund the “Metro Rail Project.” However, in 1998 Los Angeles County banned local funding of new Subway construction. The funding started again in 2008 when voters passed another ½ cent tax to fund a $1.5 billion, 6.6 mile, expansion of the Metro Expo line to Santa Monica. On May 20th, 2016,  the expansion finally opened.

"Who would get from NoHo to Santa Monica first: Car or Train?" 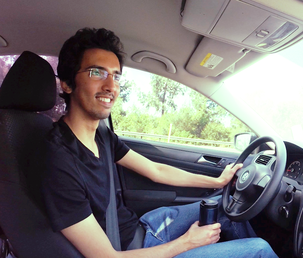 METRO: (9:30 am) I took the escalator down into the NoHo metro station. Getting tickets takes longer than expected and it is an annoying process due to a slow computer.

CAR: (9:30) The low-fuel indicator is on, Mohammad disregards it and drives off from the NoHo Metro station parking lot with no intention of stopping at all. Ten minutes later, Mohammed is stuck at a standstill traffic in US 101 Freeway, two miles away from the 405 exit.
​
METRO: (9:44) After a long delay due to technical problems and I am getting frustrated. A few minutes later, I experience another 15 minute delay at Universal City Station as the tracks are getting recharged. 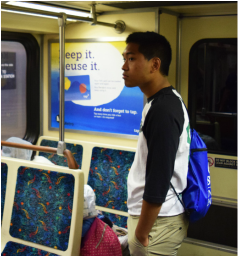 CAR: (9:55) Exiting the 405 South off ramp, frustration escalates as Mohammad has been under 10 MPH for the last 20+ minutes.
​​(10:05) Mohammad has just passed the 405 Ventura Blvd exit and is approaching the Mulholland Drive ramp. He is in heavy traffic but enjoying the views of the surrounding mountains.

​METRO: (10:08) There is an upside on the Metro: I meet people! One metro rider is also a sports fan and starts to chat about it. I am entertained for a little bit.

CAR: (10:10) Mohammad just passed the stunning Getty Center, and 405 traffic is finally breaking down.
​
​(10:20) Mohammad takes the Interstate 10 West to Santa Monica. Traffic clears but video evidence shows that he is continuing to drive slow.
​
METRO: (10:23)  After a full hour on the red line I have to take a bathroom break before transferring lines onto the Expo Line. Meanwhile...
CAR: (10:30) Mohammad arrives at Santa Monica Pier!
​
METRO: (10:30) I board the new Expo line at 7th street station. I meet a gentleman named Dave who is visiting from New York. This is his first time on the Metro and is very excited about the expansion of the Metro Expo Line. I am approached by another passenger, Sylvester, who is also riding the Metro to Santa Monica. Sylvester is friendly and fun to talk to.

"If you are looking for a day to get drunk and want to get back to the house faster, the Metro is a good way.” - Sylvester, Metro commuter

​CAR: (11:00) While waiting for me, Mohammad is harassed by a street performer on the Santa Monica Pier.

METRO: (11:28) I arrive at Santa Monica Pier, two minutes shy of 2 hours since leaving the North Hollywood Station.
A few minutes later, Mohammad and I take a photo under the Santa Monica Pier sign. 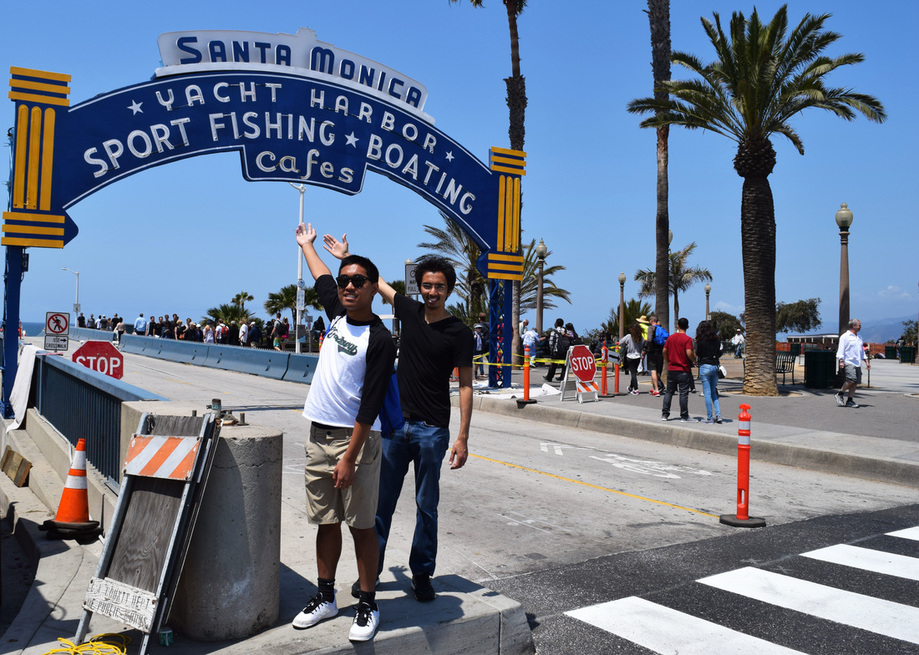 Regardless of traffic, driving a car is still much faster than the Metro. However, the Metro still has its benefits: it is less expensive, less stressful and does not waste gas on freeways. You can rest assured that you will not experience any road rage on the Metro. Who knows... maybe Metro riders will make a friend or two. As my new friend, Dave, a tourist from New York, simply puts it, the Metro... “It’s a good thing."
To ride the new Metro Expo line, visit here.