Written and Photographed by Brandin Babin 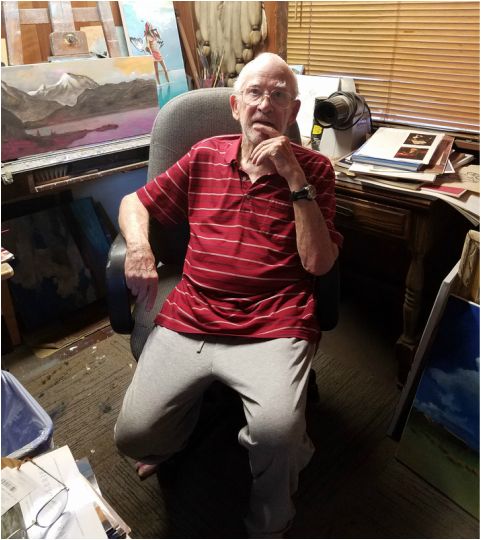 On a sunny Saturday afternoon, I sat down with Dick Babin. An avid baseball fan, he was watching a re-run of the Dodgers playing the Padres. Although he might look world-weary to some, he instantly becomes animated when discussing his past. As a studio grip in the industry for over 50 years, Dick has worked in production at Universal, Paramount, and Warner Brothers. Mention Dick Babin’s name to any grip working in Hollywood and they are sure to know him. As Dick tells me about his career, his face lights up as he relives every memory of his journey to becoming a Hollywood legend.
​
​When did you start working for the studios?
"I started back in 1958 and I didn’t start as a grip, my first job was a laborer. When I got to the lot, the boss didn’t even say 'hi' to me. He looked at me and said, ‘Get in the car, son, we’re driving to Simi Valley’. That was how it all started. When we got to where we were going I was told to flatten the hillside; my boss gave me a shovel and walked away. I was a hard worker and it showed because I got the job done quicker than expected. The boss liked my work and asked if I was interested in becoming a grip. I told him, ‘Does it pay better than what I’m getting now?’ He laughed at me and said, ‘Kid, anything here would pay better than what you’re getting now.’ The next day I was working on the show Gunsmoke, this was my first official day as a grip. Though the day didn’t exactly go as I thought it would. I got to the set and they told me to go over to the step and pull out the nails because we are going to move it, so as I was pulling the nails I didn’t notice that one of the horses backed up close to me...and he shit all over me.”

​What would you say is your favorite memory?
"I have a lot of really good memories but if I had to pick a favorite one it would have to be my retirement party. At the time I was about to retire I was working on The Tonight Show with Mary Hart. I had been working on the Tonight Show for about ten years and I was well-liked on the set. So when I told them I was retiring soon, they said they were going to throw the biggest party they had ever thrown in honor of me. I couldn’t believe it. They told me to invite my entire family. At this time I already had grandchildren; this was something I couldn’t believe because I didn’t see myself as a big star or anything, and for them to throw a party meant a lot to me."

"They said they were going to throw the biggest party they had ever thrown in honor of me...I didn’t see myself as a big star or anything, and for them to throw a party meant a lot to me."

"I didn’t know that after my heart attack that I would be there for twenty years but it happened and I’m very grateful for that.”

Were there any bad or good experiences working with movie stars?
“I have met many actors and actresses; but there are a few that made good and bad impressions; gladly, I can say more good than bad. The main actor of Hawaii 5-0, Jack Lord, was a really controlling person. The crew that worked on the show before me walked out on him mid shot because of it. I am pretty good at dealing with people and I don’t take shit from anyone. So when he would start to try and tell me how to do my job I would joke with him and, boy, did he hate that but it made him shut up and walk away and let me do my job. I made it my mission to mess with him. There was this one time he was leaning on a parking meter, so I walked up to him and put a dime in the machine he looked at me and he said, 'What did you do that for?' I replied, 'Didn’t want you to get a ticket for standing there for too long.' He got offended and walked away; but hey, me and the guys who saw me do it thought it was pretty funny. One of my favorite experiences with actors...was working on a TV show with Forrest Tucker. It was my 40th birthday and Forrest Tucker and some of the other actors paid for me to drink 40 beers. I can’t say I succeeded but they succeeded in getting me really drunk. We didn’t go to bed until around 3 am, and the next day I was at work slumped up against the truck, the producer came over and told me, if I couldn’t work he was going to fire me. But all the actors including Forrest Tucker -- who already at 7 am, was drinking a beer -- said, ‘If you fire him we’re all leaving too.’ This freaked the producer out, so he told me just do whatever it takes to sober up and get to work. So, they almost made me lose my job but they also saved it in the end.”

"One of my favorite experiences was working on a TV show with Forrest Tucker. It was my 40th birthday and Forrest Tucker and some of the other actors paid for me to drink 40 beers." 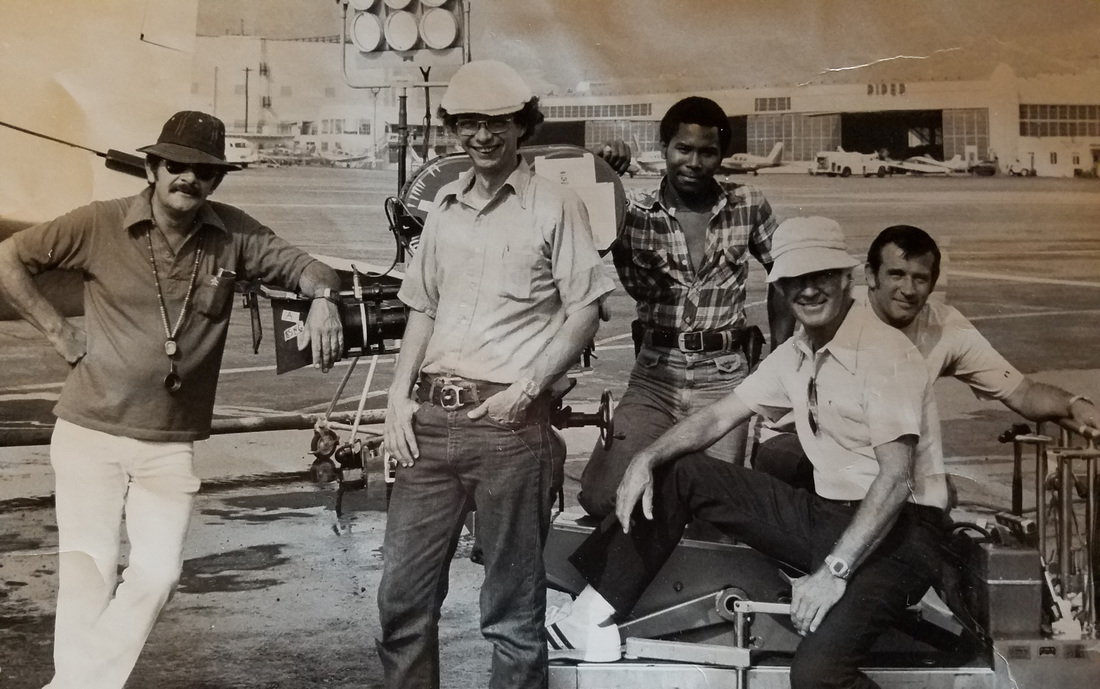 Dick Babin posing for a picture with the rest of his crew, siting on the dolly in the back