“Get lunch and make fun of me 'til I get there!" 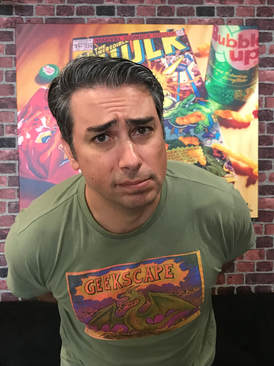 There’s a pregnant pause as my photographer and I stare down at this Facebook notification on my phone. A few minutes ago, the two of us were fussing, a bundle of nerves as we waited for our first interviewee of the semester, creator of Geekscape, Jonathan London, to arrive. Instead of fidgeting, I now let out a snort to break the silence. What a relief! I suppose it might be because I’m still a college student, prone to moments of mess-ups myself, but I’m glad Mr. London was late to our meeting.

Mr. London started his journey with radio in college, where he studied it with the goal that he would be on radio, then TV, then in late night. He, “wanted to make jokes late at night on television.” Midway through his college career, he started making short films with his friend Kevin for Kevin’s foreign language classes. Through his “foreign films” and terrible phonetic pronunciations in his acting, Mr. London was inspired to go into film school. Although he loved film and still creates films today, he, “…missed the intimacy of having [his] voice reach people.” Around this time, podcasting came into light, and Geekscape was created as an extension of his love for radio. Today, Geekscape is home to a plethora of different podcasts, a growing, supportive community, and has featured esteemed guests such as the late Stan Lee.  Now it was my time to interview a professional interviewer.

"They’re all interacting and they have a place to go. That’s what Geekscape is.”
​

​At this point, we took a pause in the interview to eat our lunch. My photographer happily began to geek out with Jonathan about the Marvel universe, to which I grinned, nodded, and laughed where I hoped was appropriate; in reality, I was preoccupied with racking my brain to pluck out any piece of Marvel-related information I could. I admittedly don’t know much about anything related to superheroes. I watched an Avengers movie once, right? … Avengers is Marvel, right?

To my surprise, I didn’t need to pretend like I knew what was going on for long. Jonathan shifted the conversation to asking us about ourselves and our studies. We told him all about our current positions and the stories of how we became creatives and what we plan to accomplish. In the back of my mind, a vague recognition pinged as I realized that this is likely what his interviewees on his podcast feel like. We were an hour into meeting the man for the first time and we were telling him our life stories. He has a way of connecting with creatives, even ones who are completely out of the realm of comics, such as myself. It might be because of his experience in interviewing, but I think it stems from his genuine interest in others. We pick up the interview again after a few slices of pizza.
​

Even though you’re making something for yourself, it’s your greatest chance at someone else relating to it, which doesn’t feel like it makes a lot of sense. It feels like the equation should be to cast as wide a net as you can to catch as many people as possible, but that’s not really how art works. Art is more like a spear because it goes deeper than that. A net’s not really going to work. That’s a great way to become generic and insincere. I try not to worry about the form, I just worry about the function and the function should have some level of expression so that other people are touched by it.

"Art is more like a spear because it goes deeper than that.
​A net’s not really going to work."

I also bounce the ideas off of a lot of people. I like to go running with my friends and I tell them my stories, and at the end I see where they got bored, and where they got excited, and what they responded to, and I write it all down. I do test the stuff out with my stories a lot. With Geekscape, it’s a test of whether I can stay connected to somebody else.

I did an episode about two months ago with a complete stranger who I had only heard about, but he’s pretty shy. He’s a musician named MC Chris and he keeps to himself. I had to talk to him through his assistant. Any correspondence had to go through his assistant. So, when I finally met him for the first time and we pressed record, for about ten minutes, you hear it in the podcast, we’re just feeling each other out. By the end of it, he’s admitting things that a lot of people said that he never admitted to before. I just had sincere interest in what this person had been through and what lead him to create music. Not only music but if you go to any of his concerts, it’s like a big celebration. He has these giant parties that happen to have music in them. Why create that atmosphere? Why have that level of altruism for other people? I was very interested because it’s something that I see for Geekscape and something that I see for myself.

The scariest thing you can do is be yourself and that’s the thing that’s going to work. And no one can copy it…” ​

What is the most important piece of advice you can offer those who want to start their own podcasts?

The three most important things are to educate, entertain, and inspire. Entertaining is great, it’s fun, it’s pretty easy to do. Educating? Know your stuff, research it. Inspiring? That means being vulnerable and sincere. Telling a story means being honest, and letting other people know it’s ok to be themselves too and celebrating other people. And if we’re geeks and we’re not doing that, then we’re really bad geeks. And there are some bad geeks out there. There are geeks who don’t think women should be playing video games, that think comics are for boys, there are geeks who are against transgender people in Star Wars, there are geeks who say, “I was different, and I found a place a comfort in these stories, but you’re different and you’re not allowed.” So, they’re probably the most anti-geek thing.

I know that I was pretty alone going through middle school and high school, and I only had video games and comics and my small group of friends to get me through. They were pretty important to me. But if I grow up, and I don’t allow someone else to enjoy those things, then I’m just an asshole. So, don’t be a jerk. Just because you’re passionate about something, and you ultimately become an authority on something, doesn't make it yours. It’s ok for other people to enjoy that thing.

We have a saying at Geekscape: "Don’t hate, create.’" All the energy that we see online, and in society right now, that’s telling people what they’re doing and what they’re thinking is wrong can really be pointed towards making something. Take all that energy, don’t be a jerk, don’t be a coward, and go make something.”

Feeling creatively charged, my photographer and I left the interview in high spirits. High enough that I let him poke fun at my lack of superhero knowledge. But only a little.

What Mr. London shared with us about his fascination with the "Why?" behind stories is something that will always stick with me. Sometimes life gets so overrun with assignments and due dates and stress that one might want to scream :"Who cares why! Just get the project done!" But it truly is our job as artists to always be looking for reason, and to integrate our findings into our own artwork and stories. I'll be keeping Mr. London's words of wisdom at the forefront of my own creative endeavors. And if you have the chance, take a moment to tune into Mr. London's podcast and warp into the Geekscape.
​
To get involved with the Geekscape community, visit http://www.geekscape.net/.