The Swing of Things 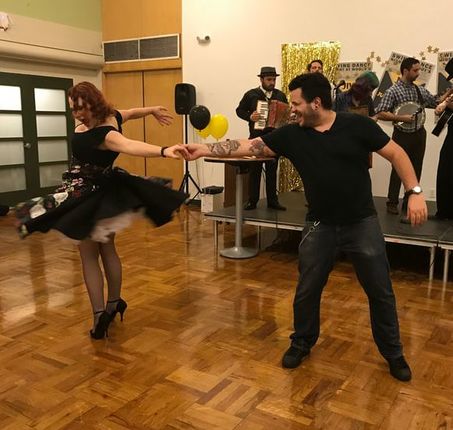 Woodbury students dance to Penny Matches
A loud live band with a roaring and energetic tune perform with propulsive forces as it creates a visceral response such as fierce feet tapping and some serious head nodding. The free and daring rhythmic styles of swing jazz sets the mood for the venue as couples engage with one another for an exciting night. As women in long skirts are lifted and flipped over with their feet in the air by men that effortlessly carry their partners’ weight with nothing but beaming smiles on their faces; this is music for the fearless, spunky, and venturesome. Music and dance have a lot in common in the way in which they evolve together. Lots of laughs, swirling, twirling, and feet stomping are what the clubs looked like back in the 1920s-50s. Just as how early hip hop and R&B music had an influence to street dance styles; the swing dance era in the 1920s and 30s have been influenced by the mellow harmonies and hard hitting rhythms of jazz music. The styles of the two when combined reflects each other as it is loose, exuberant, and the complete opposite of conservative genres such as classical and blues jazz music before the 1920s.
​
​As a millennial, when I think of Swing Dance- my mind instantly thinks about the Enchantment Under the Sea dance in Back to the Future when Marty get carried away with the music as the crowd blankly stares at him (I am not even sure if the Enchantment Under the Sea dance is considered swing dance.) So I took it upon myself to do some digging and see where these groovy tunes originated. Believe it or not, Los Angeles has a very prominent history of swing jazz music. Los Angeles’s Central Avenue, known as “The Avenue” is a famous hub for the West Coast Jazz Scene. A location that Quincy Jones once knew before the other famous street we all know in LA (Sunset Boulevard), Central Avenue has a rich history of Jazz music. It's the home of many famous landmarks such as the Dunbar Hotel, Club Alabam, The Downbeat, and the Lincoln Theater; this was the prime spot for hearing swing jazz. Even as these famous clubs slowly disappeared over time, swing music still breathes in Los Angeles. However, there aren't too many bands that have crossover appeal across generations. Penny Matches strives to achieve this, by connecting old to new in a way that would have made a swing originator like Nick La Rocca (1920's jazz trumpet legend) tap his foot along to.

"Jazz is the assassination, the murdering, the slaying of syncopation. I would even go so far as to confess that we are musical anarchists."-  Nick La Rocca (19th century jazz musician) 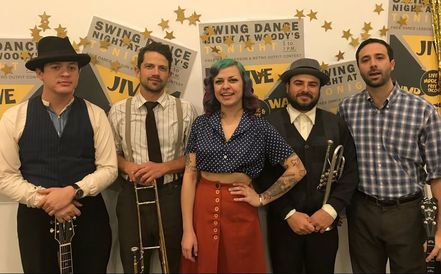 Penny Matches at Swing Dance Night
I walked into Swing Dance Night at Woodbury University and heard Penny Matches’ music blaring and I was taken into a different decade. With their dapper style of straight collared shirts combined with matching suspenders, tall fedoras, and polka dot blouses; Penny Matches is reviving swing jazz music and is making it a trend once again. The band, led by Becky Lynn, brings inspiration from their own childhood background and contributes a one-of-a-kind sound using unique instruments like a banjo and a washboard that when combined, form an unapologetic kickass band that I’m sure will make the Swing Jazz Gods proud. Their love for music and art (as an aesthetic, not as a trend) reflects their authentic, true sound of jazz music. In spite of the fact that the band formation is still young at five years old, their commitment to starting this band was determined by their adoration for swing jazz music. Becky Lynn, whose fascination for this type of music flourished at a young age, later stumbled upon a few others who shared the same interest and decided to collaborate their unique individual sounds to create their very own modern swing jazz band.

​Their interest and passion to familiarize themselves to jazz music started with their family and friends when they were just kids. From being intrigued and entertained by the exciting band scenes that would air in comedy shows featuring the Three Stooges, watching mom impersonating Mae West, admiring Exene’s style and poetic punk rock music, and discovering artists that are different from the mainstream; Penny Matches is a band created from their warm, nostalgic childhood memories. From the very first time meeting each other, they knew that their combination of their amazing talent along with their enthusiasm would create a new sound, a twist to the original style of blues and jazz.

Following the footsteps of their favorite artists and bands such as Django Reinhardt; they aspire to continue to write heartfelt music, perform overseas, and keep making friends all over the world.  The way in which they’re creating swing jazz music reflects the REAL VALUE of this music. Forget the fluffy fru-fru radio hits, Penny Matches goes all out on their passion and pays homage to the real deal swing jazz music. Spontaneous, quirky, and confident is what makes this soulful music and Penny Matches original and celebratory which translates on a universal level.

“Early punk-rock, those people were not into being 'punk'  because punk wasn’t even a thing yet. They were into being weird, they just wanted to be weird. They just liked art. If you look at the screamers and the weirdos, no one has a Mohawk, no one has a studded jacket, no one is wearing leopard print and anything yet. That is so jazzy and that's what makes jazz, punk as f***!”

​Penny Matches isn’t the only band bringing swing dance music back. Bands such as the Pink Martini and Nikki Leonti & The Jazz Night Band are just a few people that are reviving this music. In Los Angeles, there are more places to play this kind of music and Swing jazz has gained momentum in previous years such as in the 1980s and 90’s; perhaps we may be due for third coming sometime very soon. Maxwell DeMille’s Cicada Club, Rusty’s Rhythm Club, Vibrato Grill Jazz, Parq Bar, and the W Hotel serve up some great swing jazz/ jazz tunes if you ever to hear bands play and watch swing dancers swirl and twirl. As dance clubs come and go and new musical trends arise, somehow swing dance will always finds its way back into Los Angeles culture.
Listen here
pennymatchesmusic.tumblr.com
- - -
​Swing Dance Night at Woodbury:
​www.facebook.com/woodburyhealthyliving