Written by Brandon Swofford​
​Photographed by Juan Hernandez & Brandon Swofford
Artist, Painter, Rapper, Writer, Musician; these are all of the many talents of the great Umar Rashid, the artist formerly known as Frohawk Two Feathers.   As he brings in history, culture and politics in his work, I was thrilled to meet the genius behind the art-forms.  It’s a beautiful yet cloudy day in Los Angeles, as Umar Rashid welcomes me to visit his home for the interview.  I take my shoes off, we sit with his cuddly cat as he sketches ideas and he tells me about his artistic journey. 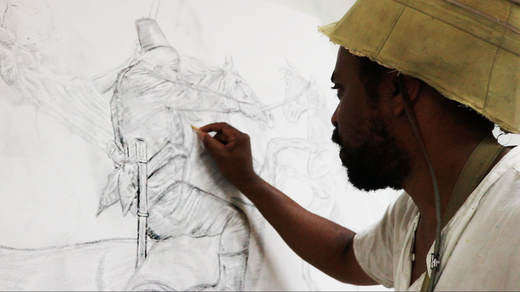 So, about your name and the origin of it...
Ah Okay! Well, actually when I moved to Los Angeles, I initially came out here to be a portrait photographer and it just wasn’t really working out.  So, I started off in Westchester, Inglewood and then I moved to LA and then I saw these two hawks just circling on this hill back here and I had just cut this Mohawk hair-do as I used to wear feathers behind my ear and it was quite literally just a combination of a couple of things.  It also harkens back to my alleged, Native-American ancestry.
​
So, “Frohawk Two Feathers”, again, some people still use it, so you could use it interchangeably if you would like.  That name was my brand, so to speak.

"When you look at a history book, you don’t really see yourself.  Especially if you’re brown, black or native, and that is why most of my work is race, class, gender, governments, humanity, futurism, pragmatism, all of these ism’s!" 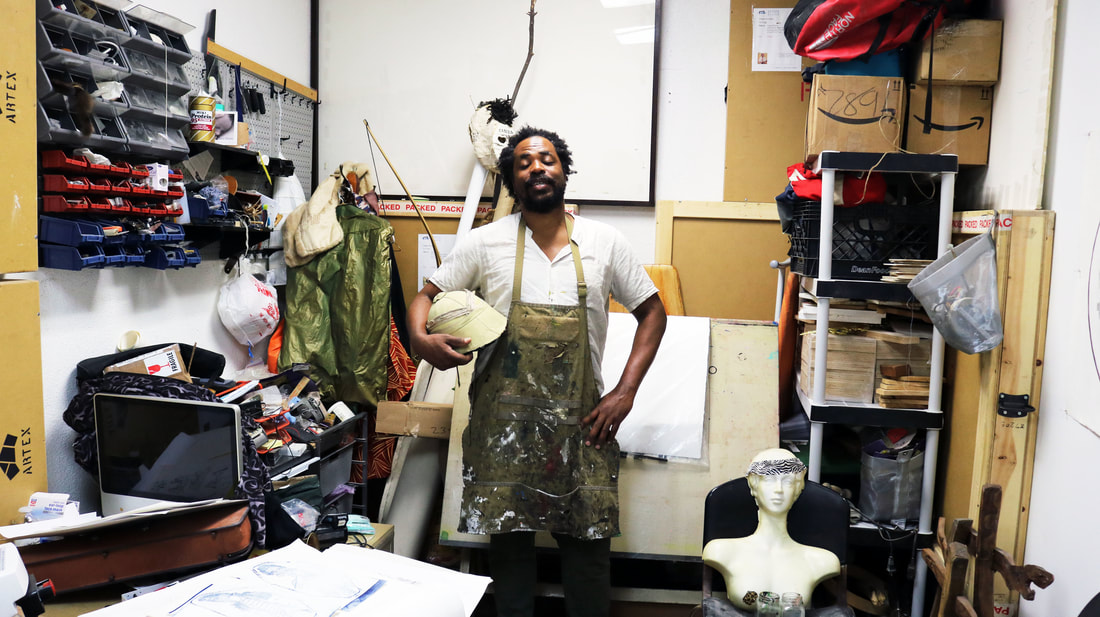 You’ve been a part of so many galleries, a lot of ones where you are featured with others.  But you have also had many solo exhibitions, such as the Visual Arts Center in New Jersey and the Museum of Contemporary Art in Denver, Colorado.  Do you prefer having a one-man show or do you like being a part of an ensemble?
For my narratives, I do like having more one-man shows. For the narratives, I have so much work to do.  So the more work I can put in a show, the better for me, so I can tell more of the story.  Each show that I do, especially solo shows, are mainly chapters.  I appreciate that.  But sometimes, I like being a part of a group show because then I can relax and there is not as much pressure.  It is interesting, and sometimes you have shows with people that you really admire.
​

"Each discipline feeds the other disciplines.  You are just creating some sort of energy ball that feeds into all of these mediums." 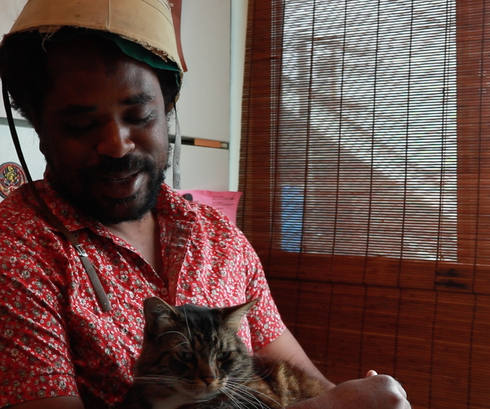 You’re a renaissance man.  You paint, write, rap, and you’re a musician.  Do you take on all of these mediums because it excites you or do you just get bored from one or the other?
I just get bored.  And for me everything rolls into the other, because I try to live my art.  My art is an extension of me. It is not a separate entity. Some people create their work but they are not their work.  If I had to just sit around and paint all day, I would go crazy.  Also, each discipline feeds the other disciplines. You are just creating some sort of energy ball that feeds into all of these mediums.
​
What was the most difficult thing you have ever faced in your career and how did you get through it?
Oh man! I guess it’s a process; there really has not been one obstacle.  Each discipline feeds another. Even in writing, I have learned about statecraft and how to levitate certain pressures.  I would say the thing that sucks about being an artist is always having something to sell. You never know if what you make is going to sell.  You put all of your labor and love into it, but you are not guaranteed if someone is going to like it or purchase it. There has never been anything that I have been so intimidated with, because once you have learned how it works, you can learn how to manipulate it.  It is like, Bishop from X-Men, whenever something is thrown at you, you got to take it and absorb it right back.
​
I do get phased out because I have a family, and I do have people I have to take care of besides myself, and that is what stresses me out.  I think my only weakness is my attachment. Other than that, “(Batman Voice)I HAVE NO WEAKNESSES!" 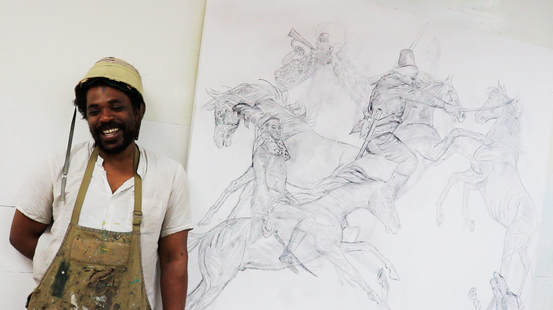 What was probably the proudest moment in your career and how did you carry that pride and move it forward?
My proudest moment was probably when I was working at a place that sold hookahs and I used to do drawings at work using office supplies. I had invoice tablet and white out, papers clips, pens and I would take all of these things and I would mound them into wood.  My Dad is a painter and I knew all of these artists throughout my life.  So I was thinking ‘I am not like them! No one is going to buy this! Nobody cares about this!’ And one day, I had walked into the gallery and I had seen that almost all of things I made had been sold.  That’s when I knew 'I CAN DO THIS!'  So, I pretty much owe them a great deal because they found me and championed me and they kind of built me up to whom I am today.
My second proudest moment was back at my show in Denver, and that was great!  I got a chance to travel.

My third proudest would perhaps be when I worked with Peggy Cooper Cafritz, who recently passed away.  She was wonderful champion of my work and great patron who got me into the gallery and put me on the radar.  They invited me to do a show in Cape Town, South Africa and that was my first time going to Africa!
​
There are some good highlights on the highlight reel, but basically it all boils down to new experiences and doing things you had never thought you would do before.

You’ve given a lot of great advice and this has been really inspiring.  What is the best advice someone has ever given you in your career as an artist?
The best advice would be from who I always go back to; my old African history teacher, Brenda Lendile.  She told me: “You are no one, unless you bring someone else with you.” And that’s it! ​

"You are no one unless you bring someone else with you."