Written and Photographed by Savanah Lavorico
​
I have been to the Staples Center numerous amounts of times and each time is a story to remember. However, this event was something like I’ve never seen before. Hockey is foreign to me and I have never watched a game on the TV or in person until last night. The only thing I knew about hockey was that they had sticks and a hockey puck, and they made goals like every other sport. But when my best friend mentioned she got free tickets from work, I brought out the Toronto Maple Leafs Jersey my aunt from Canada bought me and was ready for a new experience.

At 7 P.M. sharp, I arrived to the Staples Center for the Toronto Maples Leafs vs. The Los Angeles Kings hockey game. The first place I went after entering the building was the restroom, this ensured I would not have to miss even one second of the game. Immediately, the aggression of the game caught me off guard. My beer spilled all over me as they slammed against the glass in front of me.
Yes, I was right against the plexiglass for my very first hockey game. I have never had seats so close at the Staples Center at any other event I have attended. The hockey players towered over me in my seat, this was an unreal experience. They waited in the box like caged animals and as soon as they hit the ice they were set free. Free to glide, slam, score, and play the crazy game of hockey. ​ 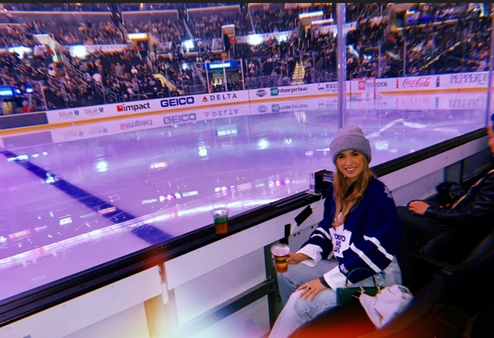 ​I was confounded, I had no idea what was happening in front of me or how long the game was going to be. The guy next to me saw my puzzled face and instantly became the guru of hockey for me and my friend. He explained that the game was split in three sections and that it could possibly go into overtime , and if no one scores they have a shootout.  I then was informed of the penalties and was shown the box they had to stay in while waiting to be allowed back on the ice. As the game progressed I caught on to more and found myself becoming a hockey fan. I slammed  my fists on the plexiglass and was on the edge of my seat for every shot. As the fans of the home team chanted “GO-KINGS-GO” I would say “TO-RON-TO”.
In the last 8 minutes, all of the players scrambled to make one goal. The players were unsuccessful, and the score ended 0-0. The suspense grew as the game headed into the dreaded overtime. When playing overtime, only 4 players are allowed on the ice per team and they only have 5 minutes to get the puck into the goal. However, not one shot was made during this time, and it was carried over into a shootout . Only If the game remains tied at the end of a regular season overtime, the game goes to a shootout. In the shootout each team is given three shots against each other. The Los Angeles Kings managed to make 2 of their 3 shots and took the win for the night. 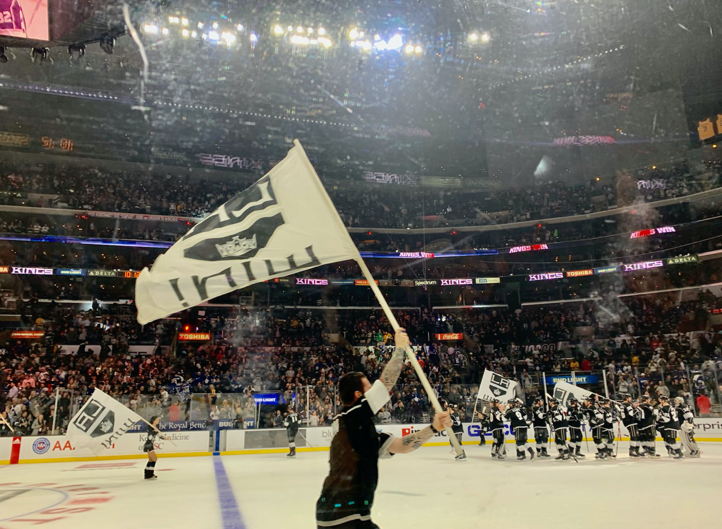 Th Los Angeles Kings basking in their victory
I was very taken back by how much I enjoyed a hockey game. It was fairly easy to pick up the rules and even easier to become a fan of the Toronto Maple Leafs. When the game was finally over, I found myself sad over the loss and anxious to come watch another game. I learned that hockey is a loud experience that includes anyone who is willing to learn about it. I am a Toronto Maple Leafs fan and I will be ice-side at another game in my future. ​