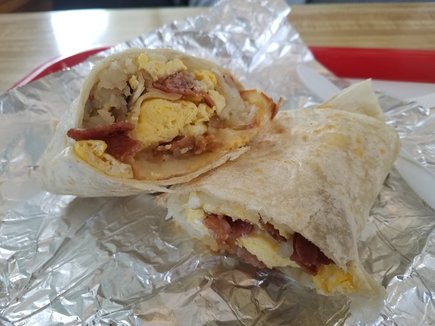 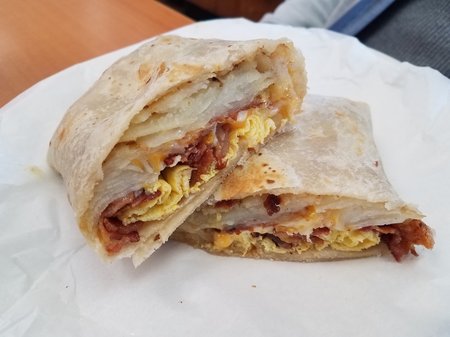 Raffi: The Old Time bacon breakfast burrito is a great local option if you're looking for a lot of food for a decent price. This burrito is large, but Old Time does not put much potato in it, which leads to an off-balance in regards to the ingredients. The bacon is crispy, but the quality of the bacon is not the best on the list. The tortilla does have texture, but only on certain areas. In short, Old Time leads much to be desired (though they do give you a lot of food). The price for the bacon breakfast burrito (not including sides) comes out to just under $6 after tax.

Jordan: Old Time is another small restaurant on a corner street with its own drive-thru. The breakfast burritos here are much more sizable and heartier than other burritos. The burrito as a whole is quite satisfactory; the bacon is crispy despite the soft tortilla shell. Their breakfast burritos seems to neglect the potatoes in the burrito, making it less prominent in the wrap and throwing off the ingredient ratio. Although tasty in its own merit, it can be a hit or miss for the patrons as there is a overall lack of texture in the tortilla, potato consistency, and bacon quality. 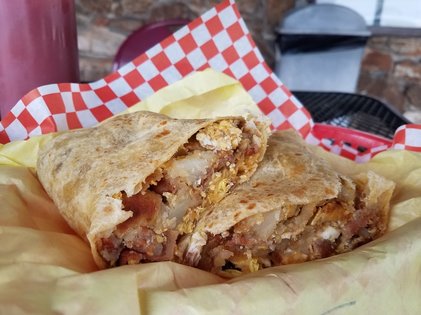 Jordan: Norm’s Hamburger's bacon breakfast burritos are pretty damn good, I was a bit shocked when I first had one for myself. The consistency of the burrito was nice for a change compared to other burritos in terms of what it contained. There was a good amount of potatoes and eggs, a little cheese, but I couldn't help but feel something else was missing, possibly more bacon. Don’t get me wrong; it was still a good burrito, and the flavor is definitely there. It was just missing a little something for me. Adding some more cheese and bacon would have nailed it as a solid bacon breakfast burrito. 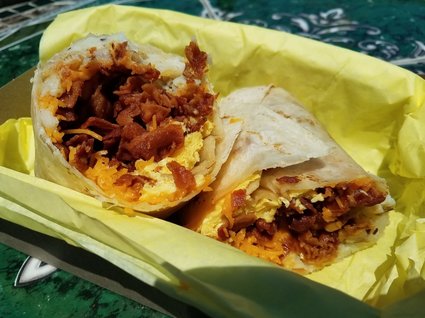 Jordan: Lucky Boy Burgers can make a mean breakfast burrito. It's not lacking when it comes to strong flavors, and above all else, this burrito is huge, so much so that it practically requires two fully grown adults to eat. The bacon is cooked to a fine crisp, giving it a solid crunch you can clearly hear in every bite. The only drawback I have with this burrito is the potato. While it is in fact flavorful and cooked beautifully, it is a bit overwhelmed by the other elements in the burrito, making it more difficult to be recognized and appreciated. 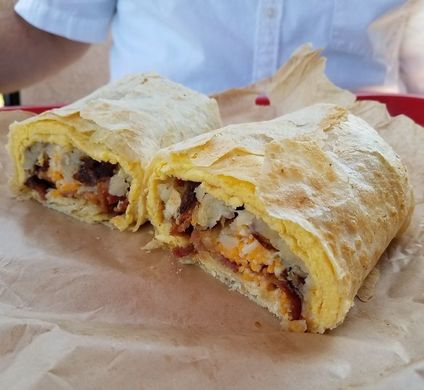 Raffi:  Mount Everest is the highest point in the world, and Everest's bacon breakfast burrito is the gold standard of what a breakfast burrito should be. The bacon is on par with Lucky Boy, and the potato is comparable to Norm's. However, both of those restaurants lacked balance. Everest is able to combine all the ingredients and make them all equal in regards to flavor. Also, the way Everest prepares their bacon breakfast burritos is distinct. The eggs wrap around and engulf all the ingredients, which is not the case with any other burritos on this list. Everest has a location in La Crescenta and Glendale, and the burrito comes in just under $6 after tax.

Jordan: Everest Burgers caters more than just burgers: they provide some of the best bacon breakfast burritos that the Los Angeles area has ever indulged in. With a crispy flour tortilla and even crispier bacon, Everest creates a beautiful burrito with an even consistency of all components, from the hash browns right down to the cheese. One thing that stood out the most about Everest’s breakfast burritos was how they prepare the soft and fluffy egg: it hugs around with the crispy tortilla shell, complimenting each other in texture and tightly encompassing all the ingredients together in a compact package. With every bite into the burrito, you can really taste all the ingredients perfectly.

It's no secret that the creation of the breakfast burrito is a culinary feat in the world of food, so good that it can be enjoyed outside of breakfast time. If you are as much of a breakfast burrito lover as we are, especially of the bacon variety, check out some of these places we have ventured to in our ultimate quest for the best bacon breakfast burrito around Los Angeles, and see for yourself if you agree or disagree with our picks. ​